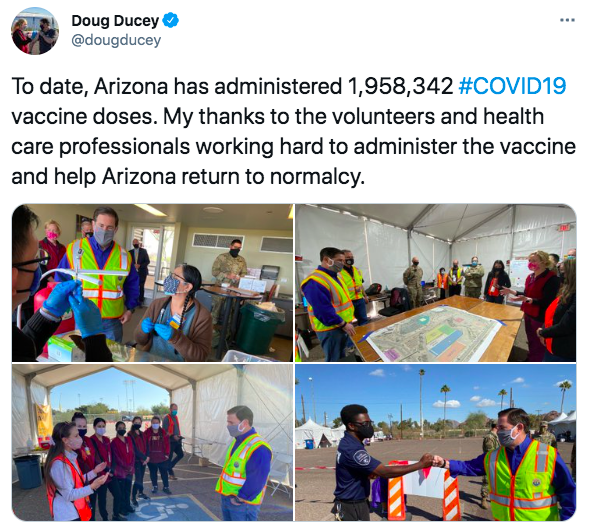 Volunteers, health care professionals and Arizona National Guard Members at the Phoenix Municipal Stadium site help administer the vaccine, direct traffic, and ensure that operations run smoothly. They are currently administering 3,000 COVID-19 vaccine doses per day, and can ramp up distribution once the state receives more doses from the federal government. The site has administered 65,624 doses since it opened on February 1.

To date, Arizona has administered 1,958,342 vaccine doses and 1,287,389 Arizonans have received at least their first dose. More than 472,000 doses have been administered across Arizona’s state-run sites.

The Phoenix Municipal Stadium vaccination site is the second state-run site in Arizona. The first state-run site at State Farm Stadium runs 24/7 and has administered 384,732 doses since it opened on January 11. The first state vaccination site in southern Arizona opened at the University of Arizona in Tucson on February 18, and will eventually be able to operate 24/7, serving up to 6,000 people per day.

A vaccination site at Chandler-Gilbert Community College reopened as a state-run site on Wednesday, March 3. It is being operated by ADHS in partnership with the Arizona Department of Emergency and Military Affairs, Blue Cross Ⓡ Blue Shield Ⓡ of Arizona, and Maricopa County Community College District.

Last week on February 22, Governor Ducey and AHCCCS, Arizona’s state Medicaid agency, announced a first-in-the-nation free transportation service to make it easier for Medicaid members to get to and from their COVID-19 vaccination appointments.