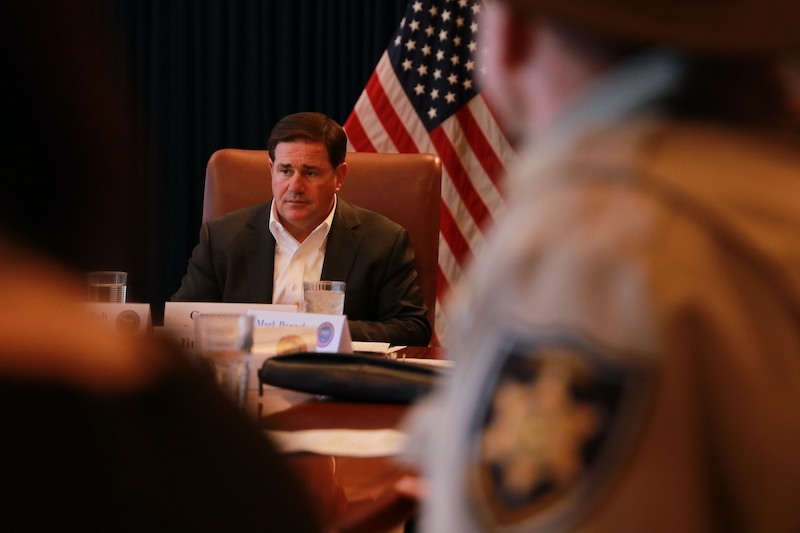 PHOENIX – Governor Doug Ducey and county sheriffs from across Arizona agree on efforts to urge the state’s congressional delegation to join the fight to secure Arizona’s southern border.

“We want to work with you on this,” Governor Ducey said to the 11 sheriffs who participated in an hour-long discussion on Tuesday afternoon. “Let’s get their attention.”

The sheriffs immediately agreed. Moments after the meeting ended, the sheriffs voted unanimously to support draft federal legislation prepared by the Governor’s Office that outlines a series of specific steps aimed at bolstering border security in Arizona and across the country.

In his 2022 State of the State Address on Monday, Governor Ducey called on U.S. Senators Mark Kelly and Kyrsten Sinema, and the state’s representatives in the U.S. House, to work with Arizona to end the public safety and humanitarian crisis at the border.

“In Arizona, we will secure our border. We will protect public safety. We will not back down,” said Governor Ducey in remarks kicking off the legislative session. “We will fight this fight until Washington, D.C. finally acts.”

Sheriff Lamb noted that his deputies seized more than 1.2 million fentanyl pills last year. “We had none in 2019,” he said.

Governor Ducey thanked the sheriffs for their leadership and willingness to step up and do what’s necessary to protect Arizona.

“You have been a force multiplier to secure the border,” the Governor said. “As the son of a cop, I grew up looking at people who wear uniforms like yours as heroes.”

The Governor also spoke about the priority he places on the rule of law, noting how shocked he is by efforts in some cities to defund the police. “Defunding the police is one of the dumbest ideas I’ve ever heard,” he said.

In addition to the plans outlined in his 2022 State of the State Address, Governor Ducey also has taken the following steps:

On January, 6, 2022, Governor Ducey announced a $7.5 million investment to expand the Arizona Western College Law Enforcement Training Academy in Yuma, supporting those who are dedicated to protecting Arizona.

On December 7, 2021, following unanswered calls to the Biden administration for a plan to resolve the border crisis and increase federal assistance, Governor Ducey again took action when the federal government failed to, surging public safety resources to the Yuma Sector of the Southern Border.

That same week, Arizona Department of Public Safety Troopers seized dangerous drugs, with an estimated value of more than $5.1 million, that were being transported from southern Arizona toward the Phoenix area.

On October 6, 2021 Governor Ducey joined Texas Governor Greg Abbott and eight other governors in Mission, Texas, for a border security briefing and press conference, where they detailed a ten-point plan for the Biden administration to resolve the border crisis.

On September 20, 2021, Governor Ducey and 25 fellow governors requested an urgent meeting with President Biden to find meaningful solutions to the border crisis. Their hope was to meet with the president and his team directly to discuss actions the administration can take. Secretary Mayorkas responded two months later on November 24, but has not taken meaningful actions.

On August 13, 2021, Governor Ducey called for the resignation of Secretary of Homeland Security Alejandro Mayorkas following explosive leaked comments in which Mayorkas called the border crisis “unsustainable,” said “these numbers cannot continue” and said “if our borders are the first line of defense, we’re going to lose.”

On June 30, 2021, the Arizona Legislature passed and Governor Ducey signed the FY 2022 budget, which included $25 million in state funding for the National Guard border mission and $30 million to assist law enforcement with border security operations, in addition to existing funding for the Border Strike Force.

On June 10, 2021, In June, Governor Ducey and Texas Governor Greg Abbott sent a letter to all U.S. governors asking them to send available law enforcement resources to the border.

On May 11, 2021, Governor Ducey joined 19 fellow governors to call on President Biden and Vice President Harris to reverse their destructive border policies.

The day after issuing the Declaration of Emergency, Governor Ducey toured Arizona’s border in Yuma and received a briefing on the escalating humanitarian and security crisis from Border Patrol, local law enforcement and community leaders.

On April 20, 2021, Governor Ducey issued a Declaration of Emergency and deployed the Arizona National Guard to the southern border to support local law enforcement efforts as the nation experiences a rapid increase in apprehensions and migrant children in federal custody.

On March 19, 2021, Governor Ducey traveled to Douglas, Arizona to get a first-hand view of the security and humanitarian situation at the U.S.-Mexico border. After taking an aerial border tour, the Governor received a briefing and held a press conference and a border security roundtable.